This evening while in the car, Esme, Graham and I were listening to Christmas tunes on the radio. A modern rendition of an old hymn came on, featuring a singer who was not familiar to me but who seemed like... well, like he might have benefitted from a bit more vocal training before he hit the recording studio. As I noted this, a sweeter voice came from my back seat.

"Mommy," said Esme, her tone thoughtful. "I think the man who's singing dis song is about to be dying, but he's still trying his best."
Posted by Cara at 6:52 PM 2 comments

Last week we had these boxes laying around the house from some new window blinds that Dave installed. Naturally, Matthew needed to use the boxes in some way before they went the way of the recycle bin. With a little help, he spent some time as a very tall roboty thing... 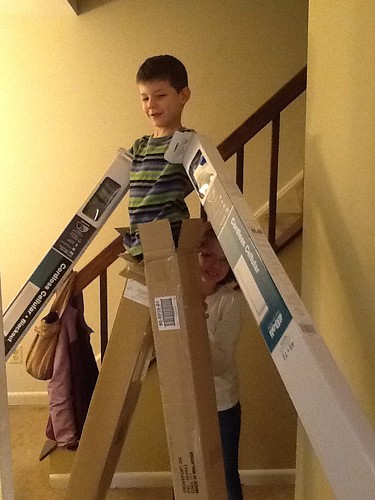 In case you didn't notice, that's Meg supporting him from behind there, and providing some perspective on how tall he was when all boxed up.

I think cardboard must dream of being shipped to guys like Matthew, don't you? Who but a little boy is going to put so much of himself (see what I did there?) into an old box?
Posted by Cara at 7:30 AM 0 comments

At our small-group family Christmas party last night, a dark-haired cutie armed with a plastic weapon hollered to my son:

"Matthew, come on! Our next mission is to kill the 'popolypse! No! The zomblies!"
Posted by Cara at 2:47 PM 0 comments

Nana has been trying and trying to get a date on our calendar for a special day with Esme. Finally, yesterday we made it work!

Esme has dreamed for months of getting to make some cut-out cookies that are featured in a tattered, old kids' cookbook we have. And right now, Mama doesn't have a lot of time to undertake a dough-rolling, shape-cutting, baking, cooling, careful-frosting, sprinkle-shaking, all-day kind of project like that. So it was Nana to the rescue! Esme finally got to make her cookies, and she brought them home to the share with the family, to a very warm reception!

Hooray for persevering and loving Nanas who make Christmas cookies, sweet memories, and happy hearts, all in one day! 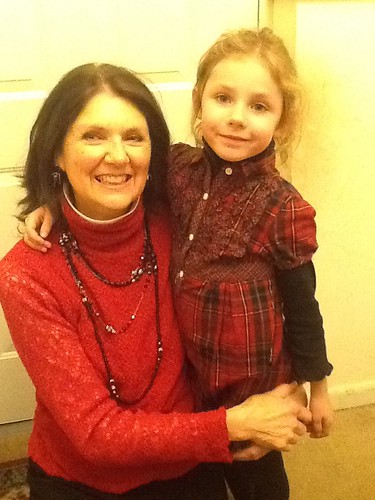 Graham's Jammies (and Other Minor Malfunctions)

I can't remember exactly what was going on with Graham's pajamas in this picture, but whatever it was, it kind of reminds me of M.C. Escher's artwork. You know, where you look at it, and then realize you should take a second look, and you keep looking, and you're still not quite sure you've figured it out... 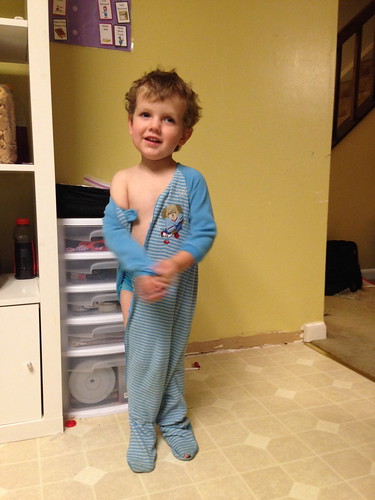 I do know that he put them on that way by himself.

And while we're on nightwear, do you know that Graham's word for blanket is? It's "blantem." As in, "Mommy, I need my blantem." This was a source of great puzzlement to us when he first started saying it. Even now it bemuses me--he has such a strong vocabulary and says many things so clearly, but... blantem.

But my favorite Graham speech-mystery is how he pronounces "taekwondo." It's "kaka-tuno." When he first began saying this, all I could think was that somehow he was trying to say "carpal tunnel." And then I would ask him if he was saying carpal tunnel, and he would get very upset and frustrated with me and say, "NO! Kaka-TUNo!" which really didn't help me at all except to make me laugh, which in turn made him even angrier...

"But that's all settled now. Now we all live in simple peace and harmony." (Name that musical.)

For Meg's party we chose the theme of "dolls and books." These are a few of her favorite things...

For our first game, we got out all of Nana's elegant dress-ups, and all of Grandma's beautiful handmade doll clothes, and we had a girls-and-dolls dress-up parade. Here are all of our lovely young ladies in their finery... 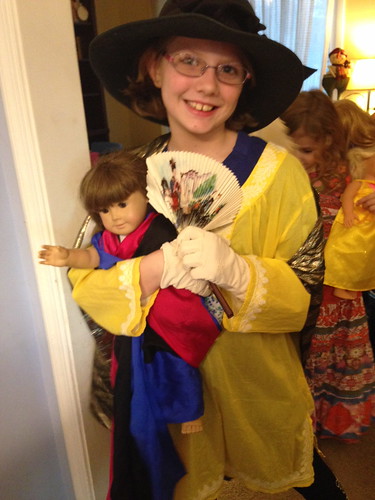 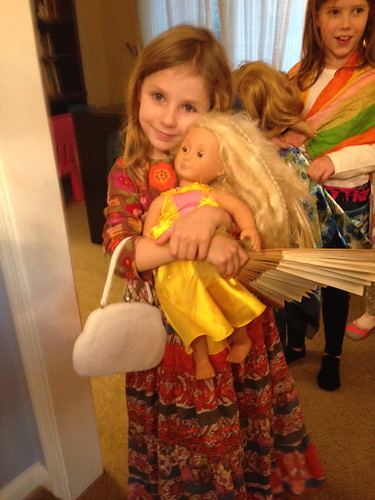 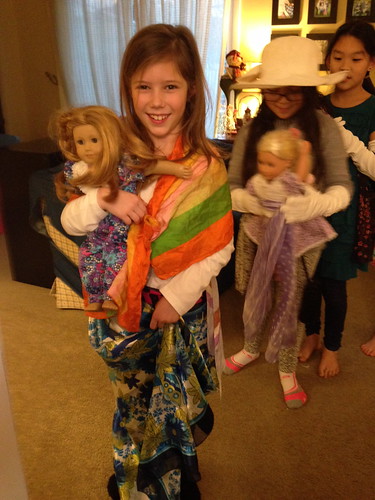 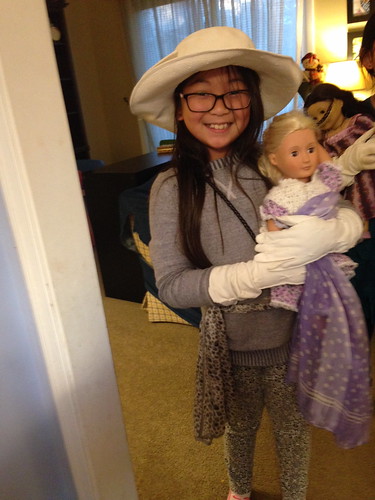 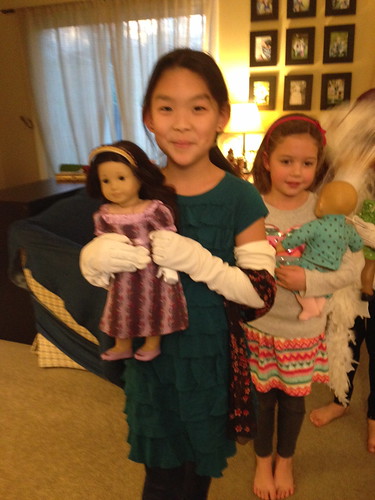 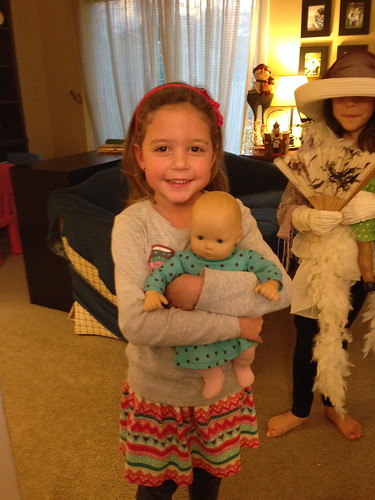 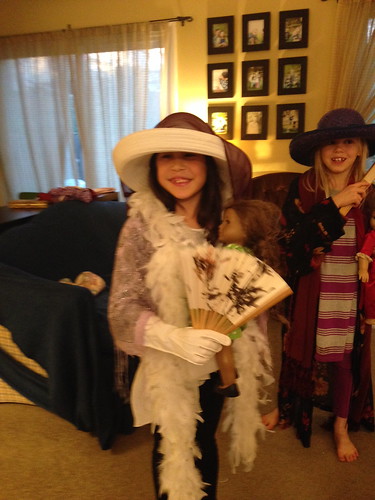 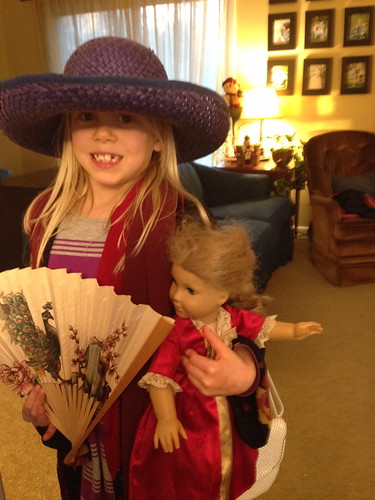 Daddy and Matthew served as judges and awarded prizes for the ladies with the most creative ensembles.

Our book-themed game required two teams to take sets of quotes from 10 familiar books and match them up to their titles. The team to match all the quotes first and correctly won. Unfortunately, I don't have any pictures from this game, but it came off really well, and--bibliophile that I am--it warmed my heart to see everyone busy with such literary scurrying.

I also don't have pictures of the pretty pink rosette cake I made for Meg (it looked a lot like this), or of Meg blowing out the candles. But you can rest assured that Meg did successfully extinguish all nine candles, and that the cake and ice cream were devoured.

All in all, it was a lovely celebration, and we are thankful to all of our sweet guests for helping to make Meg's birthday so special! 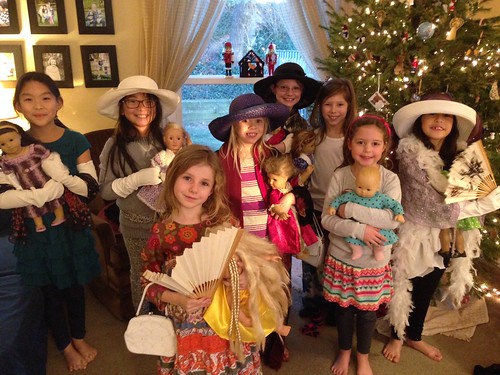 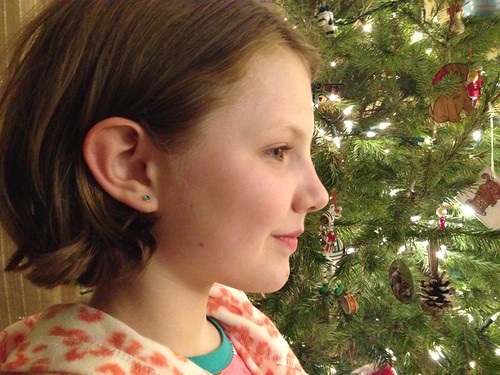 We had a quiet, family-only celebration on her special day. Here are a few cute moments.

Matthew got Meg a book she had been wanting and chose the sweetest card (which included a bookmark) to go with it. The card's inscription was quite tender (a surprising choice for our funny-card loving guy), but the best part of it was where Matthew wrote "best friends" at the bottom. 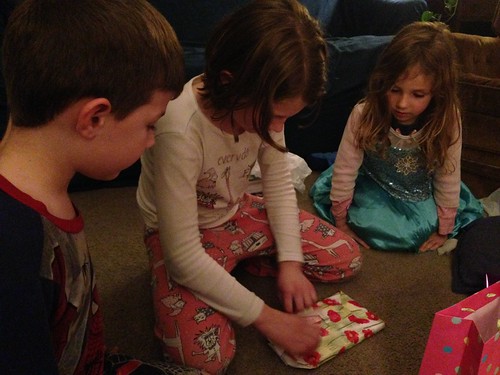 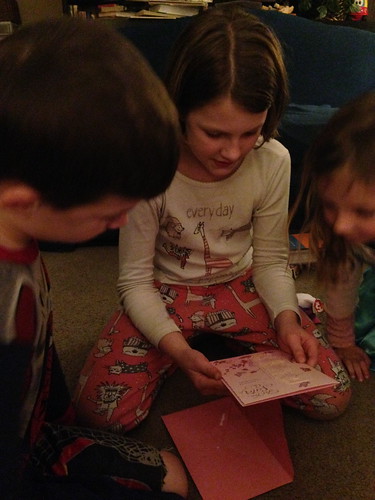 Esme and Graham's gift of a "Rarity" Beanie-Baby was a big hit too. 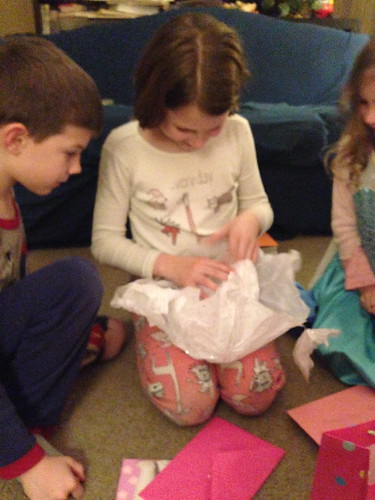 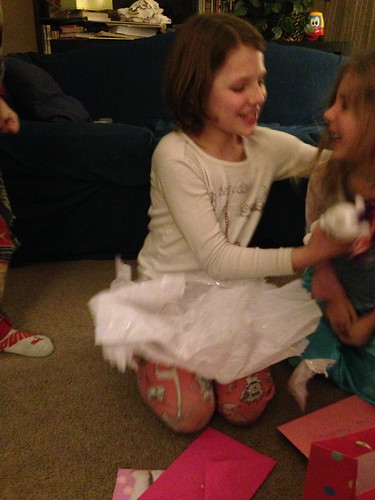 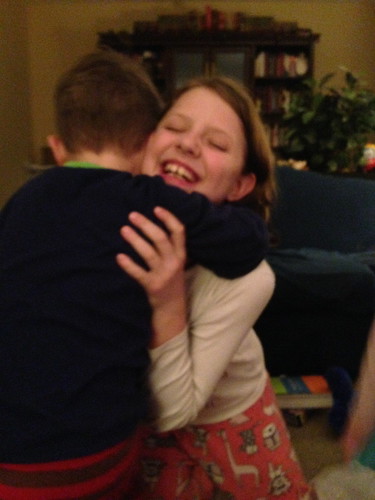 We love this young lady and see so much of God's grace in her life. She continues to be one of the quirkiest, cutest, loudest, fun-lovingest people in our world. 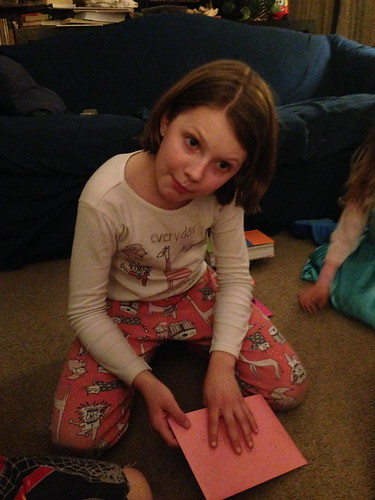 She is a passionate reader, an increasingly fierce taekwondo warrior, a can-do kid who loves a clean room and a crossed-off checklist. She's an affectionate friend. And she's a delight to converse with one-on-one. 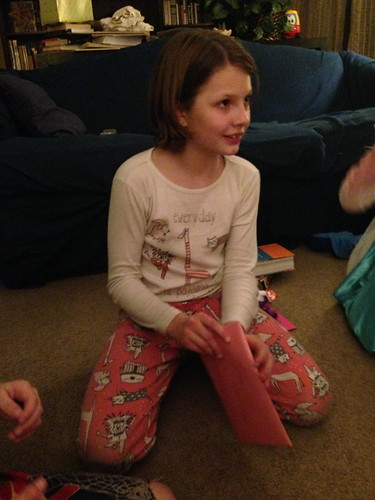 She sure did change our lives forever when she made her entrance on December 4, 2005. It astonishes us to think that she has now celebrated her last single-digit birthday.
Posted by Cara at 4:26 PM 0 comments

If you enjoy animated films and haven't seen "Meet the Robinsons", the 2007 Disney flick from which my title quote comes... just do it. We love that movie.

But like the Robinsons, the Wilcoxes have a name problem. The other day, Dave tweeted that our Christmas tree for this year is named Chester Arthur. This was primarily my decision, and it's in keeping with our tradition of naming all our Christmas trees after dead American presidents.

Ummm... only then today I went back to 2012 (which was the last time I did a Christmas tree post) and found that we already had a Chester Arthur.

Oh. No. This cannot be. We don't do repeats! At least, not until we've run out of names, which shouldn't be for another 30 years or so. I guess Chester Arthur just speaks to me as a Christmas tree name, but... no repeats is no repeats. So, like Bud Robinson, I'm taking a close look at my new
Christmas tree and saying, "Wait a second... you're not so much a Chester as... a Rutherford! Yes! Why didn't I see it before?!"

So, world, I now present to you (using the same picture my husband used to present The Tree Formerly Known As Chester)... 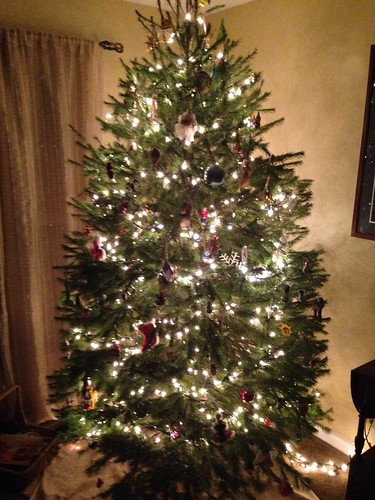 Ahhh, yes. That's it. That's better. I knew all along that something was a little off. Yes.

Or maybe I'm getting old.

Or maybe that's just what comes of naming things that are ultimately going to end up on the curb, waiting for the greencycle truck.

Only someone who's been tracking with the Wilcoxes for a loooong time will remember this story, but it shines on brightly in Dave's and my memories. Now there's a new candle burning in our Hall of Christmas Funnies.

Matthew, on December 1st: "Aren't we going to set up the Negativity Calendar today?"

(Erm, we think you meant "Nativity Calendar," which actually should have been "Advent Calendar," but... you know, given the atmosphere in our home that day and all of the bickering and arguing [children] and snapping and rebuking [parents], "Negativity Calendar" was probably just right, in an unintentionally ironic kind of way.)
Posted by Cara at 11:40 PM 0 comments

And while we're on Matthew...

...I must share one of the best things anyone has ever said to me.

"Why," Matthew asked one day, squinting at a coloring page that featured Barbie in work-out garb, "are girls so skinny?"

(I might point out that this was the pot calling the kettle black if ever I heard it, but that would be beside the point of my story.)

"Why," continued Matthew, almost to himself, "can't all girls be like Mommy? She's not skinny! And she's not fat. She's just right."

Most days, I confess, I am still far too avid for the world's ideal of "skinny." But the fact that there's a little boy in my house who thinks I am "just right" might be the most powerful inducement I've ever known for giving up my losing comparison game.