What He Already Knows

So Dave was walking the kids through the store the other day, with Graham in the front of the grocery cart. As they moved through the beverage aisle, Graham happened to glance up and catch sight of some familiar-looking neon green liquid. "Daddy water," he said casually, pointing to the Mountain Dew.

Now keep in mind that although Dave pretty much lives off of Mountain Dew at work, he never drinks it at home. The only places Graham would ever have seen him consuming it are at restaurants and in the car on long trips. And yet he obviously knows that this drink of suspiciously radioactive color is his father's tonic. I guess you really can't hide stuff from your kids--not even the two-year old.
Posted by Cara at 10:26 PM 0 comments

One morning last week, I went into Graham's room to get him out of bed. (He is a super-sleeper now, and will usually stay happily in his crib as long as we choose to leave him there--a huge blessing on a Monday morning when we want to sleep in a little!) On the morning in question, he was wet through--I mean, drenched. Jammies, sheets--very wet, and cold. Poor guy.

Me: Do you need to take a bath? Probably so.

Me: And then we'll wrap you up in a warm towel. Sounds good.

Graham: Yeeup. I deegusting.
Posted by Cara at 9:18 AM 0 comments

Last month we did a joint family day with the Marcantonio family. Dave and I so loooove D.C.'s famous cherry blossoms, but we haven't made it downtown to see them in several years. Kris' and the Marc kids' spring break just happened to coincide with the peak week for blossoms, so on a perfection of a spring Monday, we loaded up both minivans with eight kids and four grown-ups and two huge strollers and lots of picnic stuff and headed off to find us some pink trees.

Instead of the Tidal Basin, we opted to visit Kenwood, a very tony, mid-century neighborhood in Bethesda that has street after street after street lined with cherry blossom trees. And let me tell you, it was buh-reathtaking. I mean... so much beauty it was hard to take it all in. Light blue sky with heaps of white cloud scudding along, spring-green lawns, and millions and millions of tiny, pink, silken blossoms--on the trees, swirling in the air, blanketing the ground like fine, pink lace. Along the streets we walked, there were spots where the blossoms had pooled in great, pink drifts. The kids gathered huge handfuls of them and flung them at each other, unleashing bursts of gossamer confetti. It was glorious.

We ended our outing at the neighborhood playground, which was mobbed. But we grabbed one of the benches for long enough to take a few pictures. Sometime during our walk Jess realized that, put together, our kids, for a few months, are ages 8, 7, 6, 5, 4, 3, 2, and 1. As both of our families have now broken the babies-every-two-years pattern, we will never again have this straight of ages starting at one. Jess insisted that commemorative pictures were in order. So we tried. 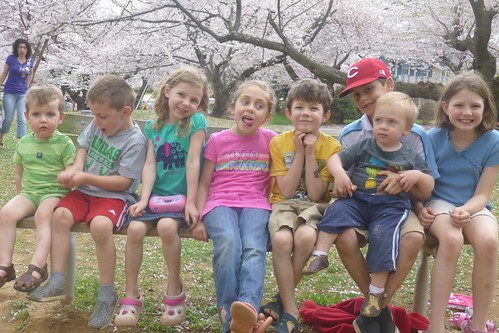 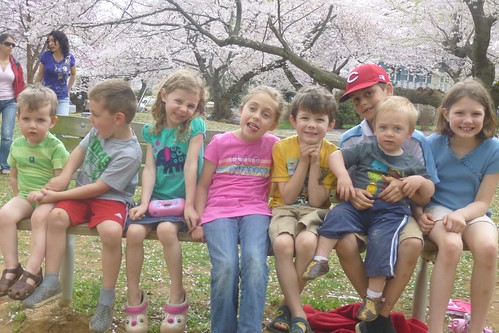 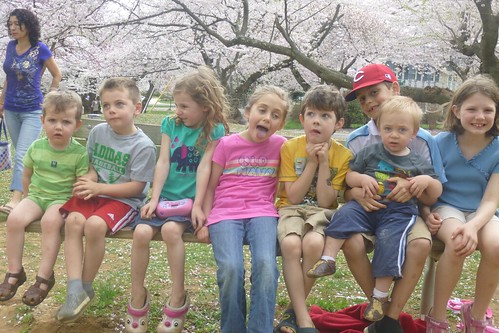 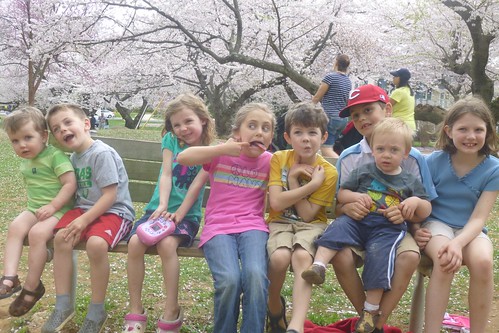 Left to right, this is Graham, Sam, Esme, Emma, Matthew, Henry (on the lap), Jack, and Meg. 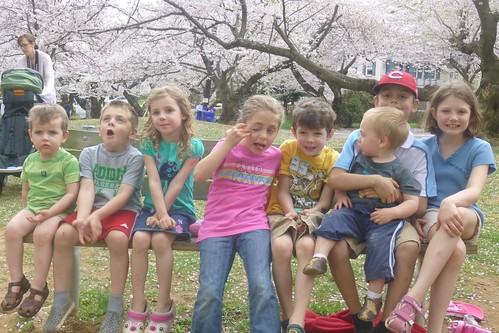 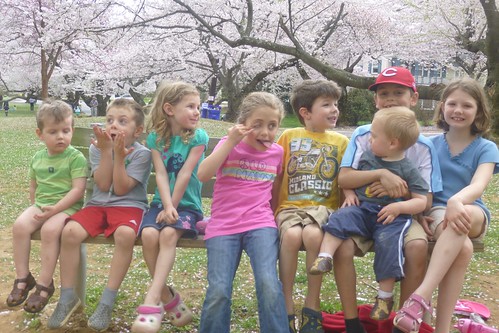 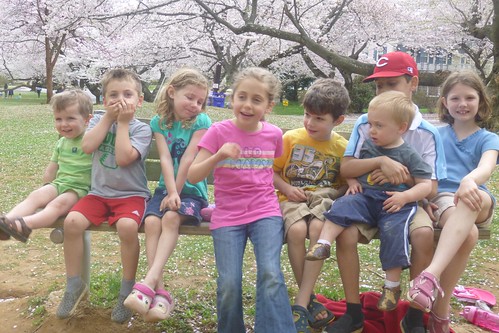 All of these pictures were taken in the course of about 120 very hard-fought seconds. The dads tried to keep everyone in line, while the moms clicked away frantically. Then we tried to take a picture of the adults, just for fun. This is what we got. 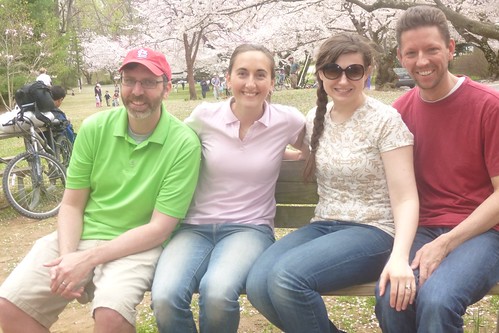 Just this one. And that only by the grace of God (and Meg's camera work)!

Another wonderful day added to our storehouse of memories with the Marcs! I think this was one of the best yet.
Posted by Cara at 1:22 PM 0 comments

Well, no time to waste in lamenting. Let's get right down to business. Recent pictures, from one of our spring family days lately... the littles did the swings with me while Daddy took the big kids to practice bike riding on the baseball field. 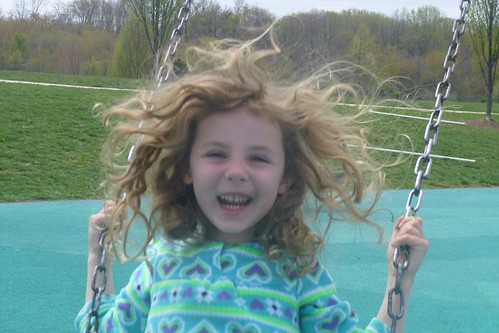 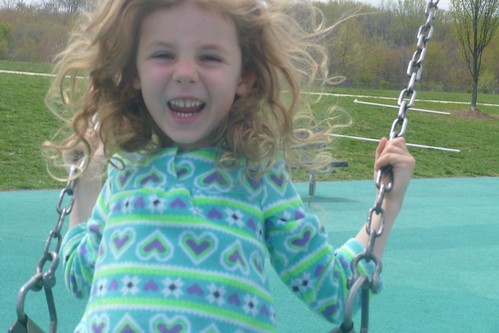 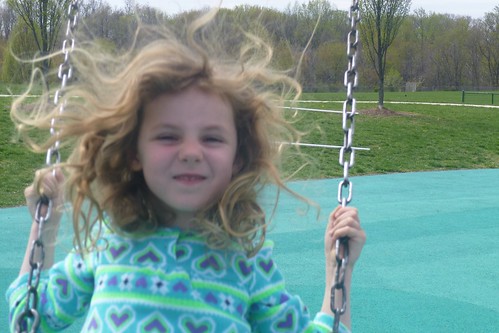 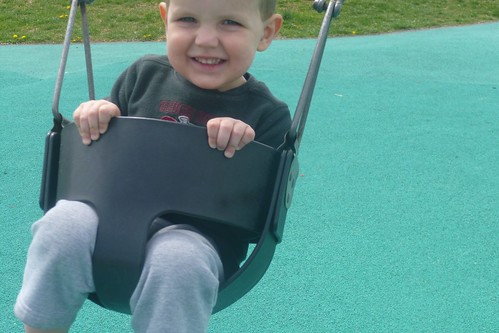 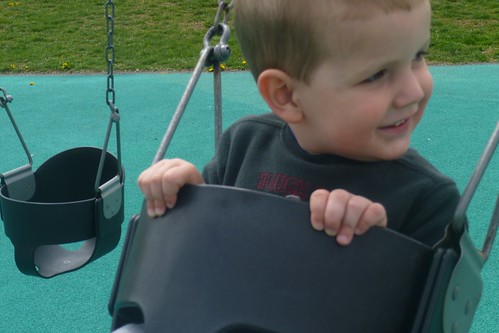 Then Graham spent some time exercising his valiant steed, er... chipmunk, which he said was a fox. And if you don't know what a two-year-old sounds like when he tries to say "fox," well, then, you might have been one of the people raising their eyebrows at me that morning. 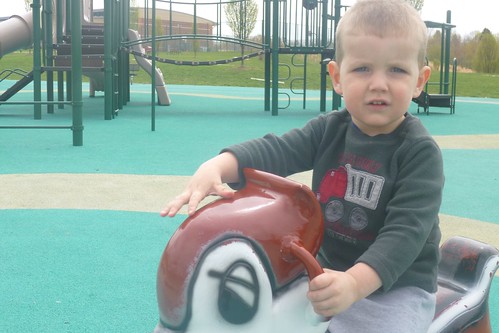 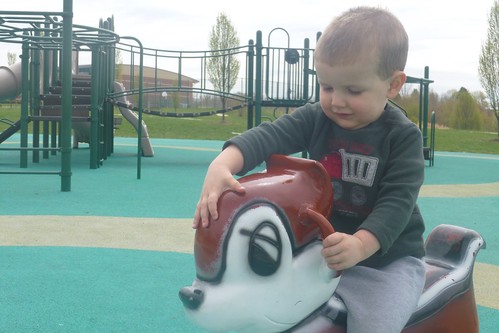 There was a guy at the park with a super cool remote-controlled airplane. I'm guessing it had about a 3-foot wingspan. He was really good at flying that thing--it was a fairly windy day, and he had no problem making it do just what he wanted. We had so much fun watching it loop and soar and glide to a halt on the green soccer field.

But the really exciting news of the day was that bike-riding finally really "clicked" for Meg, and Matthew had some nice long runs too! It was great, because Meg went into that day so discouraged that she has no place to practice safely at home (we live at the top of a hill, with no driveway) and convinced that she would never get it. But it was her day after all.
Posted by Cara at 9:21 PM 0 comments